In August, Murat Otepbaev and I climbed a new route up the western wall of Pogrebetsky Peak’s western summit (1,870m, Russian 5B, French 6c+). In all the ascent took four days: a day of approach and reconnaissance, two days to reach the summit, and a day to descend. We had reckoned on about five days and stocked food accordingly. Well, nothing proved to be of use.

We started climbing at ca 4,600m. The first day began with ne?ve? at about 60° for the first 400m, then it became steeper and the névé changed into a thin crust of ice over snow. Belay anchors were exceedingly difficult to find. We had set out at 2:30 a.m., and toward 4 p.m. we counted 22 pitches, but we could not find anyplace to spend the night. As we approached the rocky headwall, on pitch 27, it was 6:40 p.m. A strong wind made the search for a bivy site more difficult, and the advent of darkness did not cheer us up at all. We found a narrow shelf in the rocks, crawled into our tent, and began to heat water so at least something entered our stomachs. Food didn’t make it.

We arose, as though by command, at 6 a.m. Neither of us wanted to abandon his warm sleeping bag. Our watches indicated 5,920m. We pulled ourselves together and sluggishly slipped into the cold. The metal gear stuck to our gloves; our bodies refused to cooperate. We returned to the route and climbed on ice-covered rocks, balanced on crampons. We climbed two and half pitches and bore down on the upper névé field. This led to a couloir, which in turn would lead us to the upper ridge. This gave us strength and confidence. But the couloir did not let us relax, and on the last two pitches we really had to toil. On the ridge the wind was howling. The summit was a stone’s throw away, but sleep and hunger demanded we rest, so we dug in for the night. We felt no urge to eat—in vain did we drag so much food with us!

In the morning we descended the north slopes, below Pogrebetsky’s main summit. We fell often in the deep snow and thick clouds tried to divert us from the path, but our desire for food and warmth was stronger. At 11:10 p.m. Dima Grekov met us in the kitchen at Camp 1 for Khan-Tengri. A profound thanks to him—the lights of the base camp were like a lighthouse for us.

Editor’s note: Pogrebetsky Peak (6,527m) was named for Mikhail Pogrebetsky, who led the Ukrainian team that did the first ascent of Khan Tengri in 1931. The mountain rises above the intersection of the Druzhba Glacier and the south arm of the South Inyl’chek Glacier. Three impressive climbs (including the Durov-Otepbaev ascent in 2013) have been completed on the north and west sides of the western summit of Pogrebetsky (6,487m). In 1980, a team led by E. Streltsov climbed the ridge splitting the west and northwest faces (Russian 5B). In 2006, a Krasnoyarsk expedition led by Alexander Mikhalitsin climbed the nearly 2,000m north-northwest face, then labeled the last unclimbed high-altitude wall of the former Soviet Union. This face had previously been attempted in 1984, 1989, and 1991. The Krasnoyarsk team spent seven days on the ascent of the north face, with another two days to descend. They found difficult climbing (6B overall) on compact marble and limestone, and were forced to spend several nights in sitting bivouacs in hammocks. 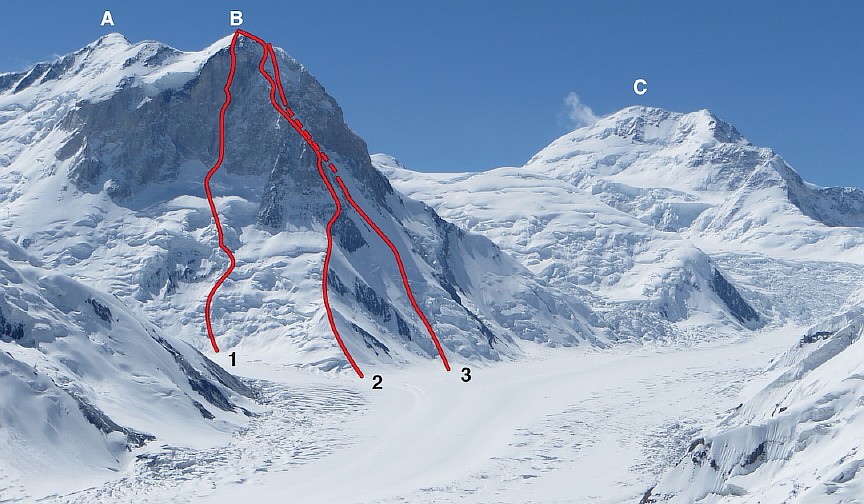 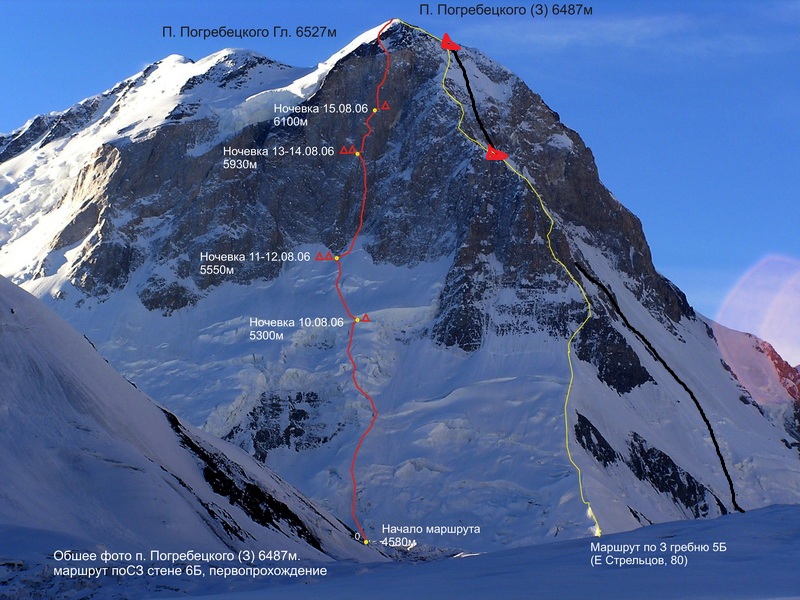 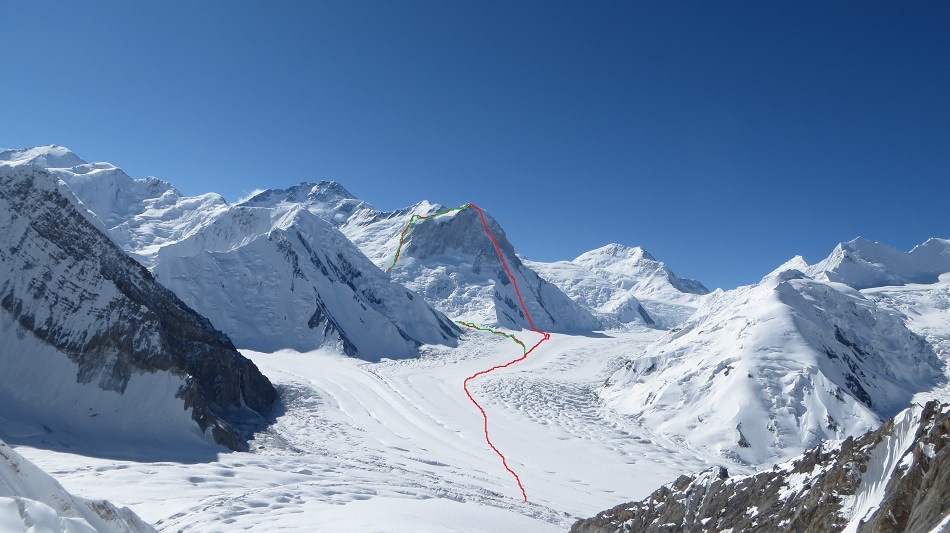